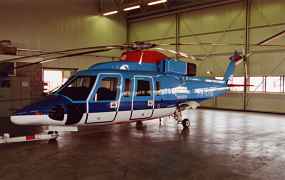 On December 20th, 1997 the Sikorsky S-76B helicopter PH-KHB was conducting a serie of shuttle flight sorties between rigs and platforms over the North Sea in the K5
and Pentacon field area.
During the fifth sortie, after sunset and in dark night conditions the final approach to production platform L7-A resulted in a go-around. After a left turn a second approach was initiated. After power reduction to loose height and speed in a relatively short time the helicopter lost almost all forward speed and entered a steep descent towards the sea. Realization of this situation was too late and the application of collective power could not prevent the helicopter entering the water. Crew and passengers were able to evacuate the helicopter. After approximately one hour in the water they were picked up by a supply vessel.

During this period one passenger deceased.

The accident most probably was initiated by a large power reduction during the turn to final to platform L7-A thereby creating the onset for a high rate of descent, which went unnoticed by the crew.

When the crew realised the situation, the application of collective power reduced the sink rate but came too late to prevent the helicopter hitting the water.

Crash is due to an human error.